California cities and counties are preparing to pay for abortions, lodging, or both as they anticipate an influx of travelers from states that will ban the procedure if the U.S. Supreme Court overturns Roe v. Wade.

Post-Roe, California would be the nearest legal abortion provider for up to 1.4 million “women of reproductive age” in other states, according to the Guttmacher Institute.

“Everybody, as they always have, have been working at the local level to ensure that patients have access to care. They just know right now there’s a sense of urgency because they know there’s a need to expand capacity,” Hicks said.

The one-time allocation of tax money will be up for a vote next month as part of the county budget, Supervisor Cindy Chavez said. “We are demonstrating our commitment as a county to being a sanctuary for women and a defender of personal liberty and freedom,” said Chavez, who co-authored the proposal.

“We are looking potentially at an epic humanitarian crisis in which thousands of people may be forced to travel hundreds or more miles to obtain an abortion,” Supervisor Susan Ellenberg said. 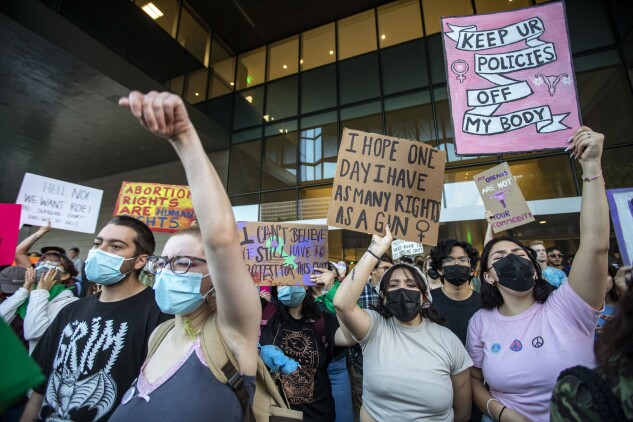 Demonstrators during an abortion-rights rally outside a courthouse in Los Angeles on May 3, 2022.
Photographer: Jill Connelly/Bloomberg via Getty Images

San Francisco County Supervisor Hillary Ronen has asked legislative budget analysts to determine how much it would cost to for a program that would fund travel and accommodations.

“How much can we afford? How can we stretch our limits and prioritize this to make sure that we have the backs of our sisters in other states that don’t care if they die in a back alley procedure, which is what happens when you outlaw abortion,” Ronen said during a May 3 board meeting.

Ronen, who heads the Budget Committee, acknowledged that while “we have endless needs right here in San Francisco,” she feels compelled to act because when a woman’s “right to decide her own reproductive health, future, and destiny” is at stake.

“We all have to stand up and have her back no matter what state line, what city line we sit in,” Ronen said.

In Sacramento, state lawmakers are debating legislation (S. B. 1142) that would put up cash to help low-income residents and those from out-of-state obtain abortions.

Another state proposal (S.B. 1245) would create an abortion-access safe haven pilot program in Los Angeles County regardless of residency. The measure, which would direct $20 million to fund the program, is scheduled for a May 9 hearing in the Senate Appropriations Committee.

“Preserving women’s access to quality reproductive health care services is critical,” according to a motion of support the Board of Supervisors approved May 3.

San Diego County last year declared itself a “champion for reproductive freedom,” although the resolution didn’t include any funding. Board of Supervisors Vice Chair Nora Vargas said the county is working with providers to figure out how best to help those from out of state.

Statewide, discussions about how to respond to the end of the Roe era have been under way at least since 2019, when the governors of California, Oregon, and Washington signed a proclamation reaffirming the commitment to protecting women’s reproductive choices.

To contact the reporter on this story: in San Francisco at jcutler@bloomberglaw.com

To contact the editor responsible for this story: at tmay@bloomberglaw.com