The Biden administration is making a first-of-its-kind ask of the health-care sector: to act on climate change. However, the pledge to reduce greenhouse gas emissions is voluntary, making researchers and advocates question how effective it will be.

The Department of Health and Human Services is asking that hospitals, health suppliers, drug companies, and other industry participants sign a pledge to reduce their greenhouse gas emissions to net zero by 2050, inventory their supply chain emissions, and develop a climate resilience plan for their facilities.

The US health-care system accounts for 8.5% of the country’s greenhouse gas emissions, according to a 2020 paper. Hospitals are frequently among the largest employers in their communities and are often one of the highest drivers of carbon emissions.

The HHS’ request could help build momentum and encourage more industry leaders to engage on the issue, said Antonia Herzog, associate director of climate policy and advocacy at Health Care Without Harm, an advocacy organization focused on addressing climate change in health care.

These goals are “pushing the envelope” for the industry by getting more parts of the health industry involved and getting those who are already doing so to take a look at their supply chain emissions, which are more difficult to address, she said.

“The impacts of climate change on human health are going to get worse and worse and worse,” HHS Assistant Secretary for Health Rachel Levine said in an interview. “People tend to think of it as existential, that’ll happen in 2050. But we’re seeing it right now.”

Levine returned to New York City this month to witness NYC Health + Hospitals sign the HHS pledge. It’s the same city where she learned how to be a doctor and where over 35 years ago she treated children with asthma caused by poor air quality and lead poisoning.

NYC Health + Hospitals is the largest municipal hospital system in the US with 11 hospitals, 5 nursing homes, and 70 primary care sites. It serves 1.4 million patients.

Levine said the pledge by the NYC hospital system, a safety-net provider that treats communities disproportionately harmed by climate change, sets a “powerful example": “You’re saying that despite the ongoing burdens of the pandemic and the other challenges that you face, that you’re going to address this issue to avoid the harms caused by climate change.”

During the event, New York City Councilman Rafael Salamanca Jr. held up his inhaler as he told Lincoln Hospital workers about the need to address climate change, especially in the South Bronx. “One of the health disparities that we have here is our environment. I’m a product of this environment, born and raised in this community my entire life. I’m an asthmatic. I have to walk around with my asthma. So does my 7-year-old son.” 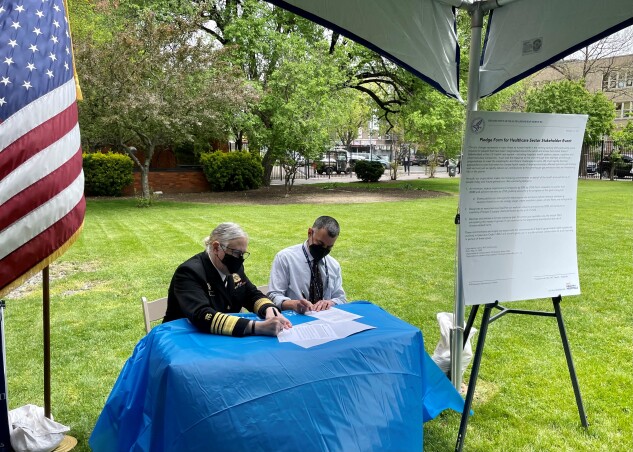 The HHS has been clear this is the start for its work on climate change. “This pledge is not a finish line by any stretch of the imagination. It’s a starting point for rolling up our sleeves together, deepening our knowledge, making supports available, so that the actual change can happen,” said Joe McCannon, health sector lead for the HHS Office of Climate Change and Health Equity.

“We realized that climate change truly is deeply connected to the health of our entire communities,” said Seema Wadhwa, executive director of environmental stewardship for Kaiser Permanente, which operates 39 hospitals and more than 700 medical offices in eight states and the District of Columbia.

But those efforts are far and few between. The health-care industry is behind in addressing climate change and “we can only speculate that it’s because we get a social pass” to focus on immediate patient care rather than long-term pollution impacts, said Jodi Sherman, a professor at the Yale School of Medicine and director of the Yale Program on Healthcare Environmental Sustainability. Other industries are now facing proposed Securities and Exchange Commission standards for greenhouse gas pollution reporting and improvement.

Researchers who focus on climate change in health care are uncertain whether the voluntary pledge will have any real impact on greenhouse gas emissions in the sector.

“The challenge, of course, is that voluntary commitments have not worked to date, and we risk not going far enough, fast enough,” Sherman said.

The voluntary nature of the pledge puts a “question mark” on how effective it will be, said Lovisa Gustafsson, vice president of controlling health-care costs at the Commonwealth Fund. It gives health system a direction for their goals and could eventually lead to proposals with “a little more teeth.”

The UK’s National Health Service has a plan to decarbonize by 2045 and has reduced its emissions by 26% from 1990 to 2020. “They’ve gotten far with measures and implementation strategy, because they’ve been mandated to do so,” Sherman said.

Getting Hospitals on Board

First, the HHS has to get hospitals on board. It is giving entities until June 3 to sign up for the pledge. Hospitals have been upfront that “many probably won’t be able to get through their process and get sign off by that date,” Herzog said.

Mitchell Katz, CEO of NYC Health + Hospitals, said hospitals have a huge role in climate change because they use a lot of resources.

The American Hospital Association is already working to “help hospitals reduce the carbon footprints of facilities,” President and CEO Rick Pollack said in an April 22 statement. “The hospital field is committed to doing our part to reduce emissions and promote environmental stewardship, but we know we cannot do this alone. We urge the Biden Administration to pursue a collaborative approach.”

Putting attention on climate change through this pledge puts the issue “on the radar” for the C-suite, Gustafsson said.

It’s likely that health systems already working on this issue will take the pledge “because they’d already taken steps to evaluate their emissions and had already been analyzing how they might be able to reduce them and systematically track them,” Samantha Ahdoot, a pediatrician and former member of the American Academy of Pediatrics’ council on environmental health executive committee, said. 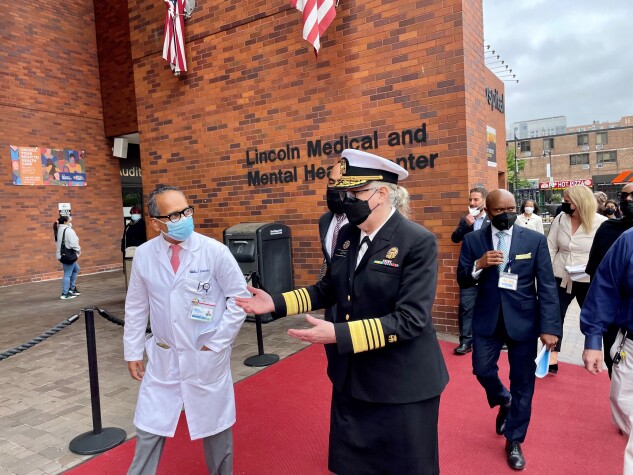 Some researchers and advocates asked why the HHS didn’t start with making this pledge mandatory.

Ahdoot said mandating the pledge would’ve caused “a lot of consternation and confusion” with the complicated regulatory process.

“Rather than starting with standards or regulations, we’re starting with understanding their needs, trying to introduce support, and then in time we’ll explore other policy options that are available to us,” McCannon, of the HHS climate change office, said.

“HHS is going to consider every policy lever that’s at its disposal to help to address this very urgent problem,” McCannon said. “Everything is on the table.”

The Centers for Medicare & Medicaid Services could change the standards in the conditions of participation hospitals must meet to get paid by the Medicare program, Herzog said.

The standards could be revised to include allowing projects that reduce greenhouse gas emissions and plan for emergency preparedness for climate change to count toward the community benefit. Nonprofit hospitals have to provide health benefits to the community to keep their tax-exempt status.

The CMS could also pay hospitals based on their performance in addressing climate change, which would help “contain health-care costs at the same time as we elevate access and quality of care,” Sherman said.

“Our mission is to do no harm, and we know that emissions are harming people. They’re harming the health of people now, and they threaten the future of children,” Ahdoot said.

To contact the reporter on this story: in Washington at sstein@bloomberglaw.com

To contact the editor responsible for this story: at bbierman@bloomberglaw.com