The U.S. Senate aims to pass next week a bipartisan $550 billion infrastructure bill that is a cornerstone of President ’s economic agenda, even as negotiators continued to write the legislation into the weekend.

Senators convened for an unusual Saturday session, but bipartisan negotiators failed to produce a bill by midday to allow an amendment process to begin.

Senate Majority Leader urged the group to finish their work and said there would be an update later.

“The longer it takes to finish, the longer we will be here,” the New York Democrat said. “But we are going to get the job done.” The infrastructure is more than 90% done, lawmakers say.

The legislation was formally put up for debate Friday, a milestone after weeks of stop-and-go negotiations. The 66-28 vote to move ahead reflected the broad bipartisan support for the plan in the evenly divided Senate.

Still, lawmakers weren’t able to meet a self-imposed goal of finishing the text of the bill Friday afternoon, and there will be days of debate on amendments that will push a final vote on the legislation to late next week. Republicans are calling for an open amendment process, which could lead to dozens of votes over several days. In anticipation of the text delay, many left Washington Friday night.

Senate passage of the infrastructure bill would set the stage for later consideration of a budget resolution that could facilitate the rest of Biden economic agenda, a $3.5 trillion overhaul of policies on climate change, taxes, health care, immigration and other Democratic Party priorities.

Under Senate rules, Democrats will be able to get that approved without Republican votes, if they can stay unified on the size and scope of the package. Budget Committee Chairman said he anticipates the Senate will cancel the first week of its scheduled August recess, set to begin the week after next, to vote on it.

“With the cooperation of our Republican colleagues, I believe we can finish the bipartisan infrastructure bill in a matter of days,” Schumer said.

The legislation, which would mark the biggest investment in infrastructure in decades, was negotiated by the White House and a bipartisan group of senators led by Democrat of Arizona and Republican of Ohio. 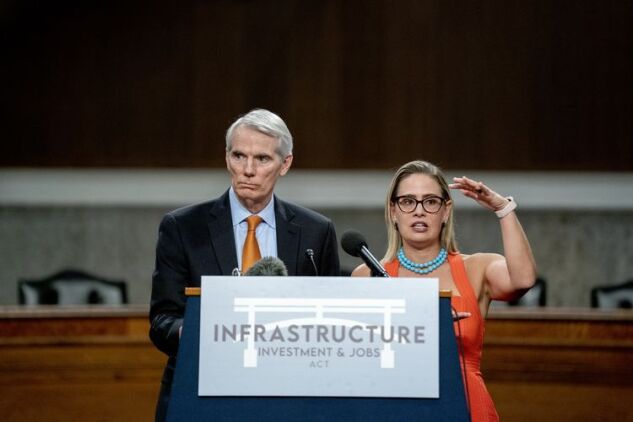 The legislation includes $110 billion in new spending for roads and bridges, $73 billion of electric grid upgrades, $66 billion for rail and , and $65 billion for broadband expansion. It also provides $55 billion for clean drinking water and $39 billion for transit, among other areas.

The legislation’s supporters say its costs would be fully offset, in part by re-purposing $200 billion in unspent Covid-19 relief funds, sales from the Strategic Petroleum Reserve, higher customs user fees and more reporting requirements on cryptocurrency transactions. It also taps a number of budget gimmicks, like counting revenue from future economic growth.

Several Republican senators, including of Florida and of Texas, have blasted the measure’s overall price tag and said they would oppose it. Senator of Louisiana, one of the Republican negotiators, criticized the “inconsistency” of his colleagues who were all-in for former President ’s idea for a $1.5 trillion infrastructure plan but aren’t supporting this package.

“If Republicans were on board for former President Trump, we are one-third the cost and have it paid for, it seems like something that should be acceptable,” Cassidy said on Bloomberg TV.

In Friday’s vote, the second procedural hurdle for the infrastructure plan this week, 16 Republicans -- including Minority Leader -- voted with all 50 senators who caucus with Democrats in favor of advancing the bill.

A half-dozen Republicans didn’t vote: of Oklahoma, of Kentucky, of Idaho, of South Dakota, of Florida and of Kansas. Risch had on Wednesday voted to advance the bill and Rounds supports the framework agreement.

Senate leaders and the negotiators dealt with last minute glitches that caused a slight delay before the vote to move forward on Friday.

Among those were last-minute changes to language on a provision for grants to states to build out broadband internet and funding for water projects.

Environment and Public Works Chairman , who has threatened to oppose the bill over the level of water infrastructure, said he has secured a commitment to get the money in the budget bill if it is not added to the infrastructure draft, so he is now supporting it.

--With assistance from and .

To contact the editors responsible for this story:
at jsobczyk@bloomberg.net