A healthcare worker administers a dose of the Covid-19 vaccine. Companies with vaccinate mandates have largely fended off legal challenges to how they handle employees' exemption requests.
Photographer: Angus Mordant/Bloomberg

Companies with workplace Covid-19 vaccination mandates have largely fended off legal challenges to their handling of employees’ requests for religious and health-related exemptions.

Workers have filed at least 66 lawsuits against private employers since September 2021 for refusing to grant exemptions, or for providing allegedly insufficient accommodations, according to a Bloomberg Law review of cases. Judges have rejected workers’ requests for immediate court orders blocking enforcement of those policies in 22 of those challenges.

Courts issued temporary restraining orders in just three cases, which involved employers putting workers on unpaid leave as an accommodation for not getting vaccinated. Yet those workers’ victories proved fleeting, as courts later denied their bids for preliminary injunctions that would have kept their employers’ policies on ice throughout litigation.

In one of those cases, a federal appeals court gave workers a second chance to win an injunction. But the airline has since changed its accommodation policy and contends that the case is moot.

The courtroom outcomes thus far signal that private-sector employers with Covid-19 vaccine mandates don’t have to fear liability for rejecting accommodation requests they believe lack merit or would be excessively burdensome to grant. But employers may still face legal challenges for their accommodation decisions, which can be expensive to defend.

“The vast majority of these requests—I’m not saying not all of them—but the vast majority are just subterfuge for vaccine hesitancy and vaccine refusal,” said Lawrence Gostin, a law professor and director of Georgetown University’s O’Neill Institute for National and Global Health Law. “The slice of those cases with genuine medical or religious claims is extraordinarily small.”

Vaccine mandates have become a routine part of many jobs, especially in the health-care industry and at colleges and universities. About four in 10 companies have some variety of shot requirement, according to a recent survey report from management-side firm Littler Mendelson PC.

Private employers’ authority to mandate vaccination has survived legal challenge. But companies still must give reasonable accommodations to workers with health-related reasons under the Americans with Disabilities Act and religious objections under Title VII of the 1964 Civil Rights Act.

Compliance rates with workplace vaccine mandates have been overwhelming, with a very small minority of workers resisting their employers’ shot requirements, said Robert Field, a professor of law and public health at Drexel University. Litigation over accommodation requests stem from a tiny percentage of extremely committed people rather than a groundswell of opposition, he said.

“This is another case of the squeaky wheel getting the grease,” Field said. “It’s common to hear the squeaky wheel, and it’s drowning out all the other smooth functioning wheels, when in fact it’s just one wheel.”

, , Hawaiian Airlines, and the Washington Nationals Baseball Club LLC are among the companies hit with lawsuits, according to a Bloomberg Law review of federal court dockets.

Religious objections have dominated, with 59% of the lawsuits based on employers’ responses to faith-based requests for accommodations. A third of the suits contested companies’ handling of both religious and disability accommodation requests, while less than 10% focused on health-based asks alone. 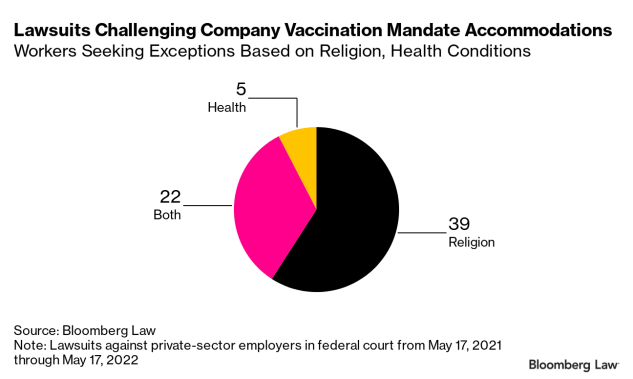 Those statistics track with Equal Employment Opportunity Commission charge data. Nearly 90% of the charges involving Covid-19 vaccines that the EEOC received between April 2020 and December 2021 were brought under Title VII, while just 10% were brought under the ADA, according to data provided by the agency.

Workers generally must have the EEOC or a similar state-level agency process discrimination charges before they can sue in court.

The scarcity of cases arising from health-based accommodation requests compared to the amount of litigation over religious objections reflects the way the law views each type of claim.

Requests for ADA exemptions must identify a specific condition that makes getting inoculated a health risk—such as a known allergy to a vaccine ingredient or an adverse reaction to a previous jab—supported by documentation from a doctor, health law scholars said.

“There really are only a few medical-related reasons not to take vaccines,” said Dorit Reiss, a professor at the University of California Hastings College of the Law who specializes in vaccine policy.

Workers so far have filed at least five lawsuits challenging denial of accommodations for a severe reaction to the Covid-19 vaccine; blood clotting; prior stroke history; a compromised immune system and infection with the Epstein-Barr virus; and asthma, the risk of atrial fibrillation, and an allergic reaction to a tetanus vaccine.

A court has thrown out one of those health-based lawsuits, and a worker in a second case has filed for voluntary dismissal. The three other cases are pending.

The standard for religious exemptions under Title VII is looser. Requests must be based on a sincere belief, which can be completely personal and run counter to official church doctrine.

Workers suing companies on these grounds have refused the jab because they believe the vaccines use cell lines derived from aborted fetuses. They’ve also raised concerns that that taking the vaccine would taint the blood they share with Christ, represent “accepting the Beast” as their “Savior,” and violate the body’s place as a “Temple to the Holy Spirit.”

And overcoming a company’s cost-based defense against a religious accommodation requests can be difficult because of the U.S. Supreme Court’s 1977 ruling in Trans World Airlines, Inc. v. Hardison, which said that anything more than a trivial expense poses an “undue hardship” for employers.

Courts have thrown out about a quarter of the lawsuits raising solely religious objections, while one has settled and the rest are pending. No workers have prevailed.

To contact the reporter on this story: in Washington at riafolla@bloomberglaw.com