Hundreds of unemployed Kentucky residents wait in long lines outside the Kentucky Career Center in Frankfort, for help with their unemployment claims on June 19, 2020.
John Sommers II/Getty Images

The Covid-19 pandemic reinforced the difficulties low-wage workers can face in getting unemployment benefits—particularly in states with large shares of Black workers, where benefits tend to be less generous and shorter-lasting.

But those advocating for change face little appetite for action in Congress, and the midterm elections could make pro-worker federal legislation even less likely if Democrats lose the House or Senate.

The more likely outcome—if past experience is indicative—is a patchwork of tweaks by state legislatures and agencies, funded in part by the U.S. Department of Labor.

In June, Tennessee’s GOP-led legislature shortened the duration of benefits instead of the kinds of changes that would make them more accessible—mirroring a trend among states after the Great Recession of 2008-09.

The state-level “changes that are taking place have been all in the wrong direction,” said William Spriggs, a Howard University professor and chief economist for the AFL-CIO. Such changes worsen racial disparity, he added, because Black workers average longer durations of unemployment.

While the federal government helps fund administration of unemployment insurance, individual states have wide discretion in establishing benefits. The current weekly average benefit ranges from $211 in Mississippi to $562 in Washington state. The national average is $390.

“The bulk of the disparity comes from Black workers being more likely to live in states where it’s hard for everyone to get unemployment insurance,” Spriggs said, pointing to January research that he coauthored.

Mississippi, which has the largest Black population per capita at 37.8%, also had the lowest average weekly benefit at $211 and one of the lowest recipiency rates at 11.9% in 2019. 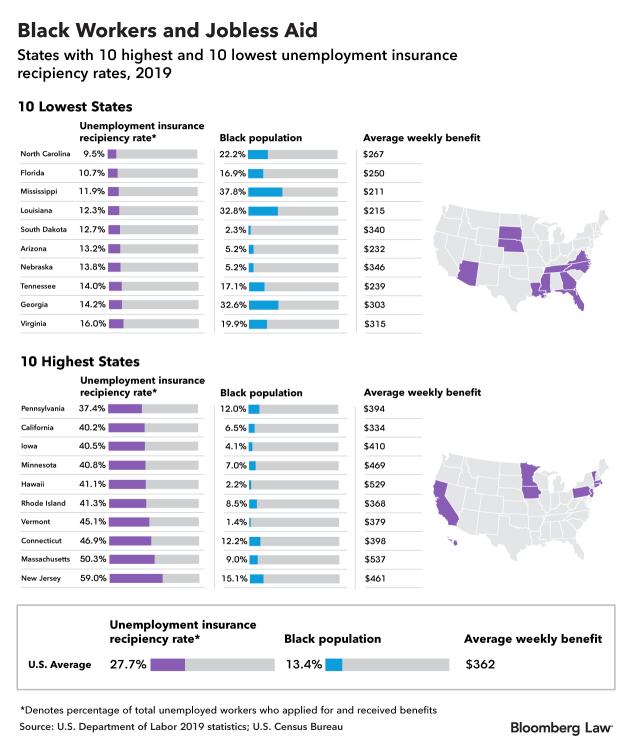 Disparities aside, policymakers are better off tightening benefits to rebuild states’ depleted unemployment trust funds and nudge people back to work, said Hayden Dublois, deputy research director at the Foundation for Government Accountability, which advocates legislation such as that passed in Tennessee. That state set its benefits duration to adjust automatically between 12 and 20 weeks, depending on the unemployment rate, while also increasing weekly benefit amounts by $25 to $50.

“The best thing for all Americans regardless of their background, race, ethnicity is a job,” Dublois said.

Racial disparity in unemployment insurance has been an issue since the Social Security Act created benefits in 1935, when federal law exempted agricultural and domestic jobs that were dominated by workers of color and immigrants.

Unemployment insurance, like much of the New Deal, “was built for white male breadwinners and carved out huge swaths of Black, Mexican American, Native American, and Asian American men and women by virtue of the occupations where they were concentrated,” said Rebecca Dixon, executive director of the National Employment Law Project, during a March 2 webinar.

A Bloomberg analysis of Georgia Department of Labor data found a similar conclusion—that Black workers who applied for benefits during the pandemic were denied more often than white workers.

One key would be changing the eligibility rules used to decide whether someone is sufficiently connected to the workforce to qualify for benefits, Spriggs said, such as using the number of hours worked instead of dollar amount earned, to avoid penalizing low-wage workers.

Sen. Michael Bennet (D-Colo.) and Sen. Ron Wyden (D-Ore.) proposed a measure last April that would set uniform federal rules for the amount, duration, and eligibility of unemployment benefits. By September, Wyden was pitching a scaled-back unemployment proposal to include in Democrats’ broad tax and social spending package. It didn’t make it into the Build Back Better legislation that House Democrats passed in November.

The pandemic’s enhanced jobless aid helped spare 4.7 million people from poverty in 2020, the Census Bureau estimated. It also gave new energy to the debate over how generously or conservatively to design unemployment benefits.

Starting in June 2021, more than two dozen GOP-led states cut off federal jobless aid months before its September 2021 expiration in the name of fighting a labor shortage.

There’s disagreement among economists, but some have estimated the states cutting off enhanced jobless benefits in June 2021 saw people returning to work faster. These sentiments and research help drive the conservative side of unemployment overhaul efforts, urging states to cut benefit durations and get tougher on work-search requirements.

Unemployment insurance “was intended to be if you lose your job, the government will pay for a portion of your wages for a period of time,” Dublois said. “All these extensions and expansions have distorted the program into really a welfare type of program.”

Beyond Congress, the U.S. Labor Department and some states are making adjustments to help more people get benefits. Among those efforts, the Labor Department is offering grants for navigator programs such as one launched in Maine, where groups including labor unions can get funding to help people apply for benefits.

Oregon, Pennsylvania, Virginia, and the District of Columbia got the first round of $260 million in Labor Department “equitable access” grant money for improving support of applicants.

“Right now it is extremely challenging for any Virginian to understand what’s being asked of them,” she said.

To contact the reporter on this story: in Atlanta at cmarr@bloomberglaw.com

To contact the editors responsible for this story: at aharris@bloomberglaw.com; at ghenderson@bloombergindustry.com