The year is still young but I’m betting that Haynes Boone will win the 2022 grand prize for having the most diverse new partnership class in Big Law.

Maybe I’m jumping the gun but I can’t think of any Big Law firm that will beat these statistics: A new partnership class that’s composed of 62% racial and ethnic minorities and 69% women. The firm calls its new class of 13 partners, “the most diverse in the firm’s history.”

There might come a time when this won’t be news, when no one will bat an eyelash that people of color and women are in the majority of a new class of partners in Big Law. Alas, that’s not the state of reality.

According to the latest National Association for Law Placement’s diversity report, based on 2021 data, women represent just 25.9% of all partners (equity and non-equity) while people of color are even further behind—accounting for only 10.75% of all partners. Though the numbers for women partners at Haynes (26%) track NALP’s statistics, the firm is ahead of the game when it comes to partners of color (17%). 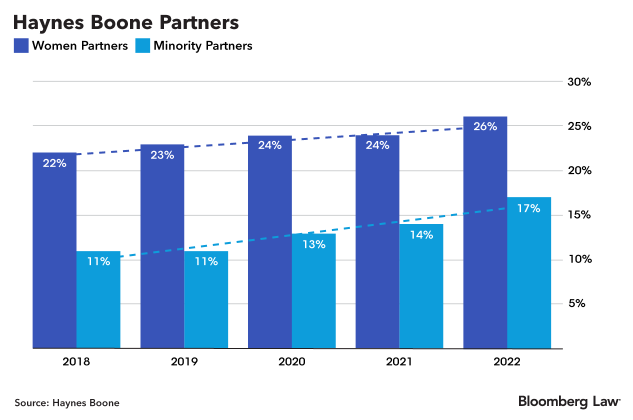 So how did a Dallas-based firm beat out its Blue-state competitors on the diversity front?

“Diversity reflects a longstanding commitment,” says Taylor Wilson, the firm’s managing partner, adding that the make-up of the new class “is not a surprise.” He explains that the firm formally made diversity a top priority in its strategic plan in 2018: “We wrote in our plan that we will be a market leader in diversity, equity, and inclusion. It caused us to do more than state good intentions.”

Sharon Jones, Haynes Boone’s director of diversity and a labor/employment partner at the firm, adds: “We are proud that 85% of the partnership class started here—which means we hired a diverse class from the start, retained them, and developed them. Being able to do that over that amount of time is a significant achievement.”

You can’t blame Haynes Boone for crowing. Though some firms also claim high diversity rates, they often inflate their numbers by including women and others in the count. For instance, Perkins Coie says “64% of the 2022 partner class is diverse, inclusive of women, people of color, LGBTQ+, and persons with disabilities.” Foley & Lardner also added “veterans” to that list, claiming a 53% diversity rate for new partners last year.

Don’t get me wrong—I think it’s fine for firms to highlight other under-represented groups in their new partner count. But when everyone is put into the same diversity pot, it obfuscates how firms are faring with racial minorities—a topic that firms like to dodge. Besides, why is being female “diverse”?

All this is to say is that Haynes Boone deserves kudos for the diversity of its latest partner class. Except for one little snag: There are no Black partners in its new class.

I’m not saying it’s mandatory that every new class include a Black partner—nor would I say that about Asian or Latinx partners. I simply find it ironic (and conspicuous) that Black partners are missing in this big crop of diverse talent.

Back in 2020, I had lambasted Haynes Boone—along with Cravath, Swaine & Moore for having zero Black partners. Since that time, Cravath has elevated two Black lawyers to the partnership, and Haynes Boone now has three Black partners. (Cravath made six partners this year, including a woman and two Asian men.)

So is the absence of new Black partners at Haynes this year symptomatic of that larger problem or just a mere bump in its otherwise successful diversity journey?

According to Wilson and Jones, there are Black lawyers who are future contenders for partnership. And there are systems in place to help them get there. “We’re looking carefully to grow those numbers,” says Wilson. “There are future black partners in the pipeline.” (The firm currently has 18 Black lawyers, including the three partners.)

Adds Jones: “We are definitely focused on the issue.” To that end, she says the firm is working with Diversity Lab, providing on-going feedback to diverse lawyers, using apps to track diversity for pitches and assignments, and more. “I think we will have diverse partnership classes in the future, and I believe there are Black partners in the pipeline.”

Wilson admits there are challenges ahead: “I hope you understand this has a high level of commitment. This is one of my highest priorities. There’s some humility that we haven’t reached our destination.”

In the meantime, let’s give Haynes Boone credit for its achievement on diversity. It’s not perfect—but I suspect it’s far better than the rest of Big Law. Speaking of which, how’s your firm doing? Drop me a line.

To contact the columnist: in New York at vchen@bloombergindustry.com